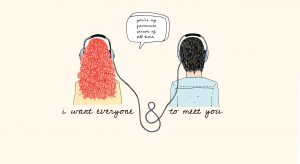 Is there anything nicer than spending an afternoon in Waterstones, browsing new books?

This month, I’ve picked up five new titles that I’m working my way through – I’ll be sharing reviews over on YouTube but here’s a sneak preview of my new reads for February.

I am loving this book. I’m a big Rainbow Rowell fan, having previously loved Fangirl and Carry On. This is the story of two teens – Eleanor is a crazy kid with red hair and weird clothes, Park is a boy who sits at the back of the bus with black t-shirts, who wants to be invisible. One day, Eleanor sits next to Park and they strike up a friendship, which becomes super-obsessive and romantic.

This is the story of Twilight, but with the gender roles reversed – so Beau is a new boy in a town called Forks, and Edythe is a female vampire who goes to Beau’s school. It’s basically the story you know but because lots of people were telling Stephanie Meyer that Bella was a damsel in distress, this story shows it’s really a human in distress. It’s interesting to see the story from another angle.

Did I Mention I Love You?

Eden stays with her Dad in LA for a summer, but does more than just sight-seeing. She starts falling in love with her troubled step-brother #awkward. It’s quite funny, but also very awkward at times. The first time they kiss is super emotional. I liked that the story is set in Santa Monica, too, because we’ve been there a few times and I recognised places in the story.

This one’s about a dystopian future in which your future is decided for you – everything from what job you’ll have to how many children you’ll give birth to. But then one girl starts falling in love with someone who isn’t the one she’s due to marry – SUPER dramatic! I like that this story is really dramatic and exciting.

Have you ever wondered what would happen if you woke up super charming and popular? The girl in this story takes a pill that makes you popular and charismatic, but of course being a book there are side effects. Like lots of kids, Aislyn is really shy, and this book makes you really think about whether that’s actually a good thing. The book then also turns a bit zombie when it turns out the pill causes a horrible disease!